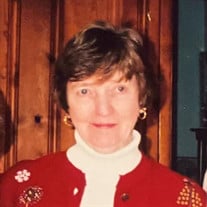 Ann Copland peacefully departed this life in her home on October 6, 2021. The only child of Frank M. Weaver, Jr. and Annie McCord Weaver, she graduated from Duke University and shortly thereafter moved to Richmond from her native Asheville to begin a career in special education. She soon made her home in Charles City County with her first husband, Edward C. Major, who preceded her in death. Ann then made another home in Charles City County with and for Albert R. Copland, who also preceded her in death, and whose brood of children and grandchildren she promptly made her own. Ann became a part of the Copland family, becoming “Grandma, “Miss Ann,” and generally an indispensable part of family events and doings, but especially the Christmas holidays and the many summer trips to her bayside home in Kilmarnock. Ann was a constant support for the adult Copland family members and a filled a absent place in the lives of the Copland grandchildren. As long as her health permitted, Ann was an avid and competitive golfer, and throughout her life was nearly as avid in playing bridge and gardening. Her intellectual interests were broad, and she was a modern rarity—going to the library almost weekly for most of her later life. Her interest in and close attention to the Duke Blue Devils never waned. Ann supported her family and community with her time, treasure and talent. Among other things, she was for many years a faithful member and pillar of Westover Church, especially the church women. Ann said she didn’t know the recipe for a dozen hushpuppies, but would never forget it for 300. She provided support for her favored charities, and her beloved Duke Blue Devils, throughout her life. Ann is survived by many nieces and nephews and their children and grand-children, on the Major and Copland sides. These include Walter (Beth) Major and children Vera, Meredith, Marie and Thomas, and Louise (Beverly) Mauck and children Meriwether (Nick) Almond and Louisa (Will) White. They also include Albert (Sandy) Copland, Jr., daughter Abigail (Michael) O’Hare and grandchildren Ava, Adrian and Aubrey O’Hare; Gordon Copland; Wallace (Tammy) Copland and children, Christina (Wes) Kneifer and Aaron Copland; and Margaret (Bill) Mountcastle, and son Ty (Keri) Mountcastle and grandchildren Caroline and Henry Mountcastle, and son Malcolm Mountcastle. A memorial service will be held 1 PM Sunday October 10th at Westover Episcopal Church, 6401 John Tyler Memorial Hwy, Charles City, VA with interment of her ashes following in the church cemetery. In lieu of flowers memorial donations can be made to Westover Episcopal Church.

Ann Copland peacefully departed this life in her home on October 6, 2021. The only child of Frank M. Weaver, Jr. and Annie McCord Weaver, she graduated from Duke University and shortly thereafter moved to Richmond from her native Asheville to... View Obituary & Service Information

The family of Ann Weaver Copland created this Life Tributes page to make it easy to share your memories.

Ann Copland peacefully departed this life in her home on October...