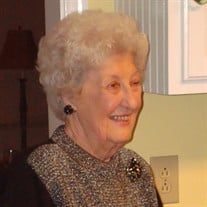 Ardelle T. Doxtater, 98, passed away on Friday, May13, 2022 at Three Rivers Health and Rehab Center in West Point, VA. She was born on February 23,1924 in Rochester, NY to Raymond J and Isabelle Becker. Ardelle grew up in Rochester, NY where she graduated from Our Lady of Mercy High School in 1942. After high school Ardelle married her high school sweetheart, Harold Doxtater in 1944 in Laredo Texas where he was stationed at the time in the Army Air Corp. They remained happily married for 62 years until his passing. They raised their family of three boys and one girl in Rochester until Harold went to work for a small manufacturing company in Michigan. They remained in Bloomfield Hills, MI for the next 4 years until Harold signed on with Xerox causing them to move back to the Rochester area (Penfield, NY). When Harold retired they moved to Virginia Beach to be closer to their two sons and daughter (Larry, Gary and Gail) who now were all living in Virginia. After the passing of Harold and later Gail, she moved to a Senior Living facility in Williamsburg to be close to her son Gary where she remained for 8 years until her death. She was a devoted and loving mother and grandmother to her family. Besides her family her next greatest passion was playing bridge where she became a player that was sought after for her skill playing the game. Ardelle is survived by; her sons, Larry (Carole, Nix) of The Villages, FL, Gary (Carol, Lapwing) of Williamsburg, VA and Greg (Jean Reichert) of Grand Island, NY; her grandchildren, Scott of Tampa, FL, Keith of Jakarta, Indonesia, Oliver of New Orleans, LA and Christopher of Baltimore, MD; her great-grandchildren Ryan, Cameron, Dorothy, Vivian and Harold and a nephew and niece Doug and Donna. Ardelle was preceded in death by her husband Harold, her brother Donald and her daughter Gail (Mike Arnold). A funeral service will be held 1 p.m. , Tuesday, May 24th at Our Lady Star of the Sea Catholic Church, 1404 Pacific Ave, Virginia Beach, VA 23451. Interment will follow the funeral mass at the church’s Columbarium where she will be placed next to her husband Harold. In lieu of flowers the family requests memorial donations be made to Catholic Relief Services; 228 W. Lexington St, Baltimore, MD 21201.

Ardelle T. Doxtater, 98, passed away on Friday, May13, 2022 at Three Rivers Health and Rehab Center in West Point, VA. She was born on February 23,1924 in Rochester, NY to Raymond J and Isabelle Becker. Ardelle grew up in Rochester, NY where... View Obituary & Service Information

The family of Ardelle Theresa Doxtater created this Life Tributes page to make it easy to share your memories.