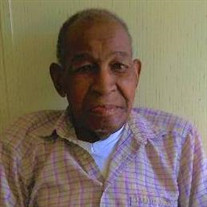 Austin Smith (Uncle Samuel) was born September 17, 1921 to the late Beverly Smith and Annie Burrell Smith. He was the ninth of ten children. He was educated in the former Union Grove School which was a part of the Middlesex County School System. As a young person he accepted Christ, was baptized and joined Antioch Baptist Church, Saluda Va. He was briefly married to the late Alethea Johnson. He is affectionally known to almost everyone as Uncle Samuel. He has been a role model and the Patriarch of the Smith Family. The last living child born of the union of Annie and Beverly Smith. He lived his philosophy of life, that one should be active, should eat healthy and use natural remedies. He did not believe that one should take medicine and to his credit he remained healthy and did not have a condition that required medication. A great feat for a person who lived 97 years. At an early age, Uncle Samuel left the comfort of his home and went to Connecticut, where he found work with a private family and also as a dishwasher. He later moved to Philadelphia, PA., where he began his career as a welder, working for Sun Shipbuilding & Dry Dock Company in Chester PA. He started working at the shipyard in 1941 during World War II. Welding was his chosen work; he completed training and was certified. He enjoyed welding. After working 45 Years he retired in 1986. He lived in the same residence in Philadelphia for 45 years. He was old school and did not have a phone. So, if you wanted to contact him you had to go to his house or send him a note in the mail. Uncle Samuel was a great person with a very nice disposition. He loved baseball and had a fondness for horse racing. Starting in the 1940’s he attended 13 straight Kentucky Derbies. He came back home to Virginia for most holidays and special occasions, bringing Katydids and other gifts for the family. He did the same for family in Penn. He always drove a very nice car, usually a Lincoln. At retirement he moved back home and lived in the home of his nephew, Woodland Holmes and his wife Otelia (deceased) until he purchased his own home. At that time, he had a large Van and he enjoyed transporting his friends and relatives in Va. to Philadelphia for the Christmas holiday. After retirement he enjoyed 33 years of living leisurely, where he could go outside, work in the yard, attend church an assist family and friends. Uncle Samuel’s immediate family proceeded him in death: Beverly Smith(father), Annie Burrell Smith (mother), Sisters: Nancy Jane Smith, Rosa Lee Smith, Edna Wynn, Nancy Evelyn Smith, Leone Smith, Fannie Smith, Florideene Terry, Brothers: Christian Smith, Alfonzo Smith. He leaves to cherish fond memories: nephews; Woodland Holmes (VA) Henry Wynn ( NY) Charles Smith ( Shirley) (PA) Kenny Terry (PA) Terry Smith (VA) nieces: Jean Hodges (DC) Catherine Holmes (PA) Carla Terry (PA) Carolyn White (VA) and Sandra Smith (MD). a host of great nephews, great nieces, Great-Great nieces and nephews, cousins, friends and his loving supporter and caretaker, Deborah Robinson. A funeral service will be held 11Am Friday, May 10, 2019 at Antioch Baptist Church, 159 Oakes Landing Rd, Saluda VA 23149. Viewing will be held, one hour prior to services at the church. Burial will take place in the Smith Family Cemetery.

Austin Smith (Uncle Samuel) was born September 17, 1921 to the late Beverly Smith and Annie Burrell Smith. He was the ninth of ten children. He was educated in the former Union Grove School which was a part of the Middlesex County School System.... View Obituary & Service Information

The family of Austin Samuel Smith created this Life Tributes page to make it easy to share your memories.