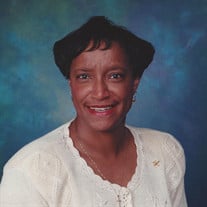 Claudette D. Woodson, 69, of Lanexa, entered eternal rest Thursday, June 9, 2022, in Norfolk, Virginia. She was born on August 31, 1952, in Charles City, Virginia to the late Lewis B. Dobson and Lucy B. Williams. At an early age, Claudette accepted Christ and joined Parrish Hill Baptist Church, Charles City where she established permanent relationships. She joined New Elam Baptist Church in New Kent after marrying the love of her life. It was extremely rare for Claudette to be absent from church service or events. Claudette received her early education in the Charles City Public School system and graduated from Ruthville High School in 1970. Later, she furthered her education at various educational institutions. She earned a Bachelor in Business Administration degree from Southern California University, Associate Degree in Basic Computer Programming and a second Associate Degree in Specialized Business. In her spare time, she earned her nail technician certification. She began her accounting and auditing career as Manager of Ball Metal Corporation. As with most things, she excelled advancing up the career ladder. At Ball Metal she received numerous awards for her outstanding leadership, work ethic, and performance. She retired from Ball Metal in 2006. In many ways, Claudette was a teacher, coach, and mentor to many. Claudette wore many hats before and after retirement. She was unanimously elected to the New Elam Trustee Board and continued in the role until becoming Treasurer. Upon becoming Treasurer, she submitted timely and accurate reporting to every member of the church. It was her philosophy that where other people’s money was concerned, no secrets should exist. Her zest for the accuracy of numbers was widely appreciated by those involved in any financial aspect of a business or organization. She served faithfully as the Treasurer at New Elam until December 31, 2021. As a member of the usher board, Claudette stood watch at the door at several churches throughout the state. If she wasn’t on a committee and you needed her assistance, she would help. Her work was throughout the county: she visited the sick and shut in, those who lost loved ones and provided transportation to and from church service, grocery stores, and medical appointments. She never wanted praise or pictures for her efforts because of her sincerity for the mission. Claudette loved people and it was easy for people to connect, love and admire her. She opened her heart to help in anyway she could and at any hour. To know Claudette, is to understand she spoke her mind. If she didn’t agree with you, it was expressed both strongly and professionally. In fact, whatever task assigned was always done with integrity, dignity, and pride. Claudette who has made her heavenly transition was preceded in death by parents: Lewis B. Dobson and Lucy B. Williams; brothers Donald and Cyril Dobson, sister, Linda Dobson Charity, step-father, Johnny Williams, father and mother-in-law Meaco and Suphronia Woodson. Left to cherish her memory is her devoted husband of 22 years, William Woodson Sr. of Lanexa, loving son, Montrese Dobson of Dumfries, faithful sister, Iona Dobson of Henrico; one step son, William Woodson, Jr. of Haymarket, and special children Zakee Light of Lanexa and Cecelia Garner of New Kent, five nephews, Johnny Mack (Kathy) of New Kent, Cyril Roger Charity, Sr, of Dumfries, Meaco Woodson III of Richmond, Marcus Dobson of Chester, and Carey Rodrick Charity of Chesapeake, six nieces, Theresa Brown of West Point, Rev. Sterline Brown of New Kent, Adrian Mason (Troy) of Chesterfield, and Latorsha Dobson Davis ( Wayne) of Richmond and Torski Dobson Arnold (Ronald) of Mechanicsville, Meaca Bey of Atlanta, GA, two great nephew Cyril Jr of Wheaton Maryland, Donathan Arnold of Mechanicsville, Austin Lewis of Woodbridge, great nieces Carmen Jacobs of New Kent, Tatiana Bey of Richmond, Ashlyn Mason of Chesterfield, Landon Davis of Richmond, Cozet Rose and Collin Raquel Charity of Chesapeake; one brother-in-law Meaco Woodson Bey, (Annie) and one sister-in-law Gloria Bassett of New Kent, three step sisters Deaconess Lillian Brown (Crawford) of New Kent, Mildred Williams and Shirley Williams, of Richmond , step grandchildren Kyle, Caleb, and Cole Woodson of Haymarket, step brother Clarence Williams of Charles City, great great nieces, cousins, other relatives and friends. A funeral service will be held 11AM Friday, June 17, 2022, at New Elam Baptist Church, 8101 Cumberland Rd, New Kent, VA 23124. A visitation will be from 6PM-8PM Thursday, June 16, 2022, at Vincent Funeral Home, Providence Forge, VA.

Claudette D. Woodson, 69, of Lanexa, entered eternal rest Thursday, June 9, 2022, in Norfolk, Virginia. She was born on August 31, 1952, in Charles City, Virginia to the late Lewis B. Dobson and Lucy B. Williams. At an early age, Claudette accepted... View Obituary & Service Information

The family of Claudette D Woodson created this Life Tributes page to make it easy to share your memories.