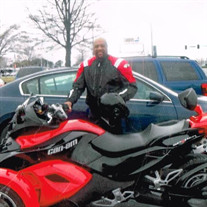 Deacon Clem Humphrey Palmer, Sr., went to be with his Lord and Savior Jesus Christ on July 28, 2021. He was born in Mercer County, West Virginia on February 10, 1950. He was preceded in death by his parents William and Ruth Palmer and his sister Deborah Swanson. He leaves to cherish his memory a loving and devoted wife, June V. Palmer; his sons, Clem “CJ” Palmer, Jr., Emanuel McEachern, Anetone (Erin), Christopher, Zaarvoni (Christiana), and Andrew Simanu; his daughters April and Leslie Palmer and Zangeria McEachern; a host of grand and great-grandchildren; his brothers, Clarence, Arnold (Elva), Walter, Bishop Dwight (Dallas), and Bishop Larry Palmer (Brenda) and his sister, Helen Fenton along with a host of other relatives and friends. Clem enlisted in the United States Air Force where he served with many units and in several capacities. He ended up retiring after twenty four years of service. Following his retirement from the service he took on a second career and began working with the civil service. Clem enjoyed being around his family and friends and knew no strangers. He enjoyed traveling, fishing, golfing, and riding motorcycles. There was a time when he desired his wife to ride with him so he taught her how to ride and brought her a Ninja 650. He was an avid golfer and enjoyed golfing with his brothers. He enjoyed playing basketball with his sons; showing them how it was really done. Although with time, things for him began to change as new chapters of life embarked. Clem continued doing the things of life that he enjoyed as much as possible; a couple of months ago with fishing and just weeks ago with traveling. He was a fighter and God gave him favor time and time again. He was a living miracle as doctors had given up on him many times; but God. You see, out of all the things he enjoyed, Christ Jesus was at the top of his list. He loved praying, shouting and testifying about the goodness of Jesus and what he had done in his life. He desired to help others and to let them know to never give up on God. He encouraged prayer to his church family every Sunday morning and he suggested praying, pray, pray even if all you could say was thank you Jesus. His favorite Bible verse was John 3:16, “For God so loved the world that He gave His only begotten Son that whosoever believeth in Him should not perish but have everlasting life.” His last conversation was with Jesus. So, don't forget to pray even if all you can say is thank you Jesus. Colossians 3:17 “And whatsoever ye do in word or deed, do all in the name of the Lord Jesus, giving thanks to God and the Father by him. A funeral service will be held 2PM Tuesday, August 3, 2021 at Vincent Funeral Home, 9923 Pocahontas Trail, Providence Forge, VA 23140. A viewing will be held from 12noon to 2PM Tuesday, just prior to services. Interment to be private at a later date. **Services for Mr. Palmer will be livestreamed at the following link 10 minutes prior to services: https://vimeo.com/event/825142

Deacon Clem Humphrey Palmer, Sr., went to be with his Lord and Savior Jesus Christ on July 28, 2021. He was born in Mercer County, West Virginia on February 10, 1950. He was preceded in death by his parents William and Ruth Palmer and his... View Obituary & Service Information

The family of Clem Humphrey Palmer Sr. created this Life Tributes page to make it easy to share your memories.

Deacon Clem Humphrey Palmer, Sr., went to be with his Lord and...