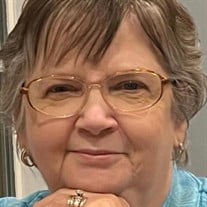 Diane Grace Garrette King of Williamsburg, VA passed away March 25, 2022. She was born January 24, 1954 in Blackstone, VA to the late Volney and Edna Garrette and the family soon moved to Williamsburg, VA. Diane was very much a “Daddy’s Girl” who dearly loved growing up in a large family. She cherished memories of time with her brothers, sisters, cousins and friends, including frequent visits to family in the Roanoke area. Diane married the love of her life, Ron, in 1971 and they lived in Indianapolis for several years before returning to Virginia. Together they raised their two precious children, Kevin and Michelle, and Diane was ever the devoted mother. She insisted on being home when her children were, even starting her own business which enabled her to do just that. In recent years Diane worked with Ron in the family’s auto repair business and this past December they celebrated their fiftieth anniversary. Undoubtedly, Diane was welcomed into heaven by her parents; her beloved son, Kevin King; and brothers, Richard and J.R. The love Diane left behind is cherished by her husband of over 50 years, Ron; her daughter, Michelle King; sisters, Peggy Johnson (Jim) of Indianapolis, IN and Virginia Rhodes (Norm) of Palm Coast, FL; brothers, Danny Garrette (Pam) of Williamsburg, VA and Randy Garrette of Appomattox, VA; numerous nieces, nephews, and cousins to include Judy “JuJu” Farabee (Jim) with whom Diane was exceptionally close; along with her sweet little doggies, whom she pampered as if they were children. A funeral service will be held 2 PM, Saturday, April 2nd at James River Baptist Church, 4931 Centerville Rd, Williamsburg, VA 23188 and interment will follow in the church cemetery. The family will receive friends 5 to 7 PM, Friday, April 1st, also at the church. In lieu of flowers, memorial contributions can be made to American Foundation for Suicide Prevention (AFSP), https://supporting.afsp.org

Diane Grace Garrette King of Williamsburg, VA passed away March 25, 2022. She was born January 24, 1954 in Blackstone, VA to the late Volney and Edna Garrette and the family soon moved to Williamsburg, VA. Diane was very much a &#8220;Daddy&#8217;s... View Obituary & Service Information

The family of Diane Grace Garrette King created this Life Tributes page to make it easy to share your memories.