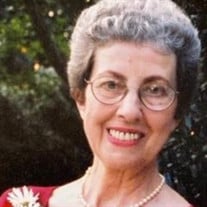 Doris Elizabeth Anderson Demm passed away on August 11th 2020, in Richmond, Virginia. To multiple generations of friends and family, she was known as “Honeybunch,” or, simply, “HB.” She was born in Richmond, Virginia, the 4th child of George Francis Anderson and Mary O’Connell Anderson. Doris adored her older brother, John Donald Anderson; and her two older sisters, Helen Anderson Valentine, and Jean Frances “Pinky” Anderson. Doris attended West Point High School, and graduated from St. Gertrude High School. She took college courses at the former Richmond Professional Institute, and completed her degree at Mount Saint Agnes College in Baltimore. Upon graduation, she worked as an English teacher in the Baltimore area, then took a job in Washington DC at the Bureau of Indian Affairs. While vacationing in Virginia Beach, Doris met a young United States Army officer, Paul W. Demm, who was stationed nearby. Paul’s career in the Army took him to France for a time; Doris followed her heart to rejoin him and they married in the town of Verdun, France, in February of 1961. Two of their three sons were born in France, Christopher and Stephen; Charles was born in Virginia, following another military transfer. Doris was a loyal military spouse, moving from France to Pennsylvania to Texas to Ft. Eustis and then to Richmond, as Paul’s military assignments changed, and taking care of three young boys during his two tours of duty in Vietnam. Doris would return to working outside the home in Richmond; at the Central Richmond Association, for the Virginia Department of Probation And Parole, and finally, the Virginia Department of Youth And Family Services. Along the way, she found time to volunteer at St. Bridget Catholic Church, and at St. Bridget School. Doris also worked for the ParentTeacher Association at Douglas Freeman High School. As a full-time worker and a devoted mother of three, Doris was always in motion. With her boundless energy, she kept the house in order, juggled her kids’ multiple sports and activities, made (and reheated) meals, used her skills as a strict grammarian to help with homework, looked after her own parents as they grew older, took care of multiple pets, and planned family vacations (for which she always tried to include an educational component). In her “free” time, she was an avid reader and walker, and she also enjoyed a Coke and an occasional whiskey sour. She loved get-togethers with family and friends, where she never wanted to be the center of attention, but instead took real joy in the accomplishments of others. Perhaps her greatest joy in life was becoming a grandmother, and she happily spent hours with her two grandsons, Jack and Donal, singing, painting, reading, listening to music, making “the best mashed potatoes,” playing baseball . . . whatever was necessary. She was a woman of faith, and while she was not a Bible scholar, she boiled things down to her oft-cited Golden Rule: “Do unto others as you would have them do unto you.” Doris is survived by her husband, Paul W. Demm; sons Christopher F. Demm and wife Beth of Greensboro, North Carolina, Stephen P. Demm and son Jack Anderson Demm of Richmond, Virginia, and Charles A. Demm and son Donal W. Demm of Lewiston, Maine. A private ceremony will be held in Richmond, Virginia. In lieu of flowers, memorial contributions may be sent to benefit the G. Francis and Mary O. Anderson Library Endowment (0266) at William & Mary. Checks should be made payable to the William & Mary Foundation and sent to the Gift Accounting Office, P.O. Box 1693, Williamsburg, VA 23198-1693. Memorial gifts can also be made online at www.giving.wm.edu.

The family of Doris Elizabeth Anderson Demm created this Life Tributes page to make it easy to share your memories.