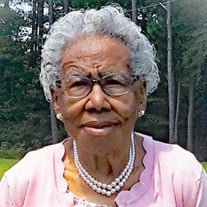 Lorene Wallace Jones-Bell, 94, of Charles City, Virginia, departed this life January 15, 2022 at her home. Lorene was born in Charles city, but spent much of her childhood in Richmond, Virginia with her mother and her siblings. On Lorene’s tenth birthday, January 29, 1937, her mother died of sickness and Lorene and her siblings soon returned to Charles City to live with relatives. In Charles City, Lorene attended Little Elam Elementary school and Ruthville High School, where she graduated Valedictorian of her class in June 1944. In high school she sang with the glee club, was a member of the debate team and president of her senior class. Lorene loved to read, read, and read some more. This caused much anguish for her younger sister, Marian, who wanted to play. However, she could not move Lorene from the corner where she sat reading. Books continued to be Lorene’s best friends until her eyesight began to fail in her later years. Lorene attended the Union Hall Sunday school for a short while before going to Sunday School at Little Elam Baptist Church. She served in many capacities at Little Elam such as Sunday School secretary, teacher, superintendent; Women’s Missionary Union, choir director of Senior Choir, co-sponsor of the youth choir; Chairman of the Trustees, Board of Christian Education and Budget and Finance; and the first sponsor of the Senior Citizen’s programs and celebration at Little Elam. The celebration included seniors from Charles City, New Kent and the St. Francis Home in Richmond, Virginia. Lorene retired from Thalhimers Department Store after forty years plus. As a concerned citizen of Charles City, Lorene worked with the Civic League and served as the first female president of the Charles City Branch NAACP. Luckily, Lorene was not a gambler because she had a fascination with numbers. No matter if she was counting people, calculating numbers, remembering page numbers in the hymnals or comparing identical greeting cards she had received, she counted everything! Lorene is predeceased by her father, Lazarus Wallace and (2) mother figures; Ethel (biological mother) and Helen (stepmother); (2) husbands, Andrew Jones (the father of her four children) and Rudolph A. Bell, Sr.; (2) brothers, James and Charles Wallace; (2) sisters, Vernell Jones and Anna Crewe; and (2) children, Sylvia and Reginald Jones Sr. Many are left to remember her kind heart, giving spirit and “never ending” instructions. Lorene leaves two daughters, Agatha Porterfield of Atlanta, Georgia and Susan Miles and her husband, Anthony of Charles City; five grandchildren, Sylvia Royster and her husband Kelley, of Woodbridge, Virginia, Reginald Jones, Jr., of Varina, Virginia, Rendell Jones and his wife Donna of Olney, Maryland, Tiffany Harper and her husband Kevin of Moore, South Carolina and Ronnetta Bell of Atlanta, Georgia; ten great-grandchildren, Andrew Porterfield and his wife Anna, Ciera and Kyan Royster, Sophia and Miles Newby, Keira Jones, Alexis Patterson and Desiree Jones; four great great-grandchildren, Alexandira, Andrew II, Arianna and Austin Porterfield. Since Lorene’s mother had five children and her stepmother had five children, she was excited to marry Rudolph who also had five children whom she loved and enjoyed having around. They are Rudolph Bell, Jr, and his wife Marian, Warren Bell and his wife JoAnne of Charles City, Joyce Bell of Sandston, Virginia, Connie Barnes of Virginia Beach, Virginia and Helen Charmae Jackson and her husband Melvin of Memphis, Tennessee; four sisters, Lutitia, Gloria and Carol Jones and Marian Bowman, all of Chales City; one brother, Howard Wallace; and two brothers -in-law, James Jimmie” Crewe and Vernon “Skee” Jones. Lorene is also blessed to have two first cousins, Mary Carther Crewe and Thomas E. Carter, Jr. A funeral service will be held 11AM Thursday, January 20, 2022 at Vincent Funeral Home, Providence Forge, VA. A viewing will take place from 5PM-7PM Wednesday, January 19th at the funeral home. **Masks are required when attending services** *A recording of the funeral service for Mrs. Jones-Bell can be found at the following link: https://vimeo.com/672406635

Lorene Wallace Jones-Bell, 94, of Charles City, Virginia, departed this life January 15, 2022 at her home. Lorene was born in Charles city, but spent much of her childhood in Richmond, Virginia with her mother and her siblings. On Lorene&#8217;s... View Obituary & Service Information

The family of Lorene Florence Jones-Bell created this Life Tributes page to make it easy to share your memories.