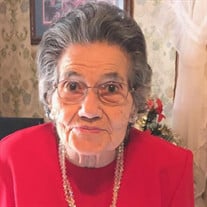 Nantee Adkins Jefferson went home to be with the Lord on January 01, 2021. She was born to Zora and Christian Ann Adkins on September 22, 1924. She was preceded in death by her husband James Sherman Jefferson and son John Jefferson. She is survived by her son, Ronald Jefferson, her daughter Eunice Adkins (Stephen), and daughter-in-law Pauline Jefferson, granddaughters, Karla Adkins (Michael), Sandy Wynn (Donovan), Natalie Allen (Mervin), Mia Eubank (Daryl) and grandsons James Jefferson and Stephen Adkins, Jr. (Ana). Along with her eight great grandchildren and three great great grandchildren she leaves behind several nieces and nephews and friends many of whom affectionately referred to her as MeeMaw. She enjoyed playing dominos and board games and babysitting her great grandchildren Kristen Adkins and Hayden Wynn over the years. Nantee was a citizen of the Chickahominy Indians Eastern Division and a lifelong devoted member of Tsena Commocko Baptist Church where she taught Sunday School for many years and served as a member of the choir. She was “mother” to many of the Tsena Commocko parishoners. She took pride in the fact that Pastor Ed took the time to send birthday cards to her. She enjoyed monthly gatherings at the Chickahominy Tribal Center where she played bingo, dominos and other games and had lunch with many of her friends.She looked forward to attending Sunday evening worship and praise services as she traveled the revival meeting circuit each summer visiting Baptist Churches within the greater American Indian Communities in Tidewater Virginia. In addition, she was a member of the Women’s Missionary Union and the Woodmen Life Chapter 6091. In lieu of flowers please make a contribution to one of the following, CIED 2895 Mount Pleasant Road, Providence Forge, VA 23140, Tsena Commocko Baptist Church 2401 Tsena Road, Providence Forge VA 23140, or Chickahominy Tribe Elder’s Fund 8200 Lott Cary Road Providence Forge, VA 23140. A graveside service will be held 11 a.m. Tuesday, January 5th in Samaria Baptist Church Cemetery. Please adhere to all necessary precautions for Covid 19. Please wear a mask and practice social distance. Vincent Funeral Home handling arrangements.

Nantee Adkins Jefferson went home to be with the Lord on January 01, 2021. She was born to Zora and Christian Ann Adkins on September 22, 1924. She was preceded in death by her husband James Sherman Jefferson and son John Jefferson. She... View Obituary & Service Information

The family of Nantee Jefferson created this Life Tributes page to make it easy to share your memories.

Nantee Adkins Jefferson went home to be with the Lord on January...