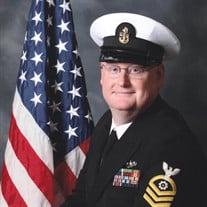 US Navy Chief Petty Officer (Retired), Robert "Bobby" Edward Hunt, age 50, of West Point, VA, passed away May 24, 2022 in Singapore. Bobby grew up in West Point, VA and graduated from West Point High School in 1991. He joined the US Navy in 1993 and proudly served as an Engineman for 20 years before retiring. Bobby then joined the Military Sealift Command (MSC) as a civilian government employee, continuing his love of travel while serving his country. His most recent deployment with the MSC was on the USNS Alan Shepard. During his Navy career, he served on many different classes of ships, earning numerous awards and medals. He earned the Enlisted Surface Warfare Specialist pin in 1998. In 2006, he was promoted to Chief Petty Officer. He was a member of the West Point United Methodist Church. He was preceded in death by his maternal grandparents, Clare and Christine Kruse, as well as his paternal grandparents, Rufus and Sarah Hunt, aunt Karilene Kruse and uncle Frederick H. Kruse. Bobby is survived by his parents, Robert and Christine Hunt, his sister, Staci Hunt; aunt Patricia Hasty, cousins Debbie Rhodes, Robin Hasty, Kelly Kale and Blair Hasty; as well as many other family members, close friends and shipmates who were like family to him. He is also survived by his former wife, Sheryll "Khaye" Hunt. In lieu of flowers, donations may be made in Bobby's name to Patriot PAWS at patriotpaws.org or to the Tunnel to Towers Foundation at t2t.org. A memorial service will be held 4 p.m., Saturday, June 11th at West Point United Methodist Church, 1020 Main St., West Point, VA 23181.

The family of Robert "Bobby" Edward Hunt created this Life Tributes page to make it easy to share your memories.