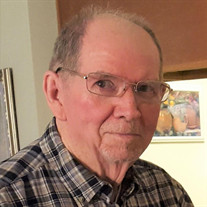 Roy Jackson Harding, 85, of King William County, VA passed away January 3, 2020. He grew up in Arvonia in Buckingham County. He retired from Nabisco as a machine mechanic after 22 years of service. Roy was preceded in death by his parents, John... View Obituary & Service Information

The family of Roy Jackson Harding created this Life Tributes page to make it easy to share your memories.