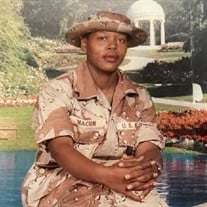 Sandra L. Macon, was unapologetically her, true to herself and one of the most loving and hard-working persons you would ever meet. Sandra’s sudden departure from this life on April 17, 2022 stole the hearts of many. She leaves behind precious memories in the hearts of her family and friends. She began her life on April 29, 1959 in Middlesex County, Virginia, being born to the late Arthur W. Mason, Sr., and Lillian H. Macon. At an early age, she accepted Christ and joined Immanuel Baptist Church, Saluda, Virginia. She was educated in the Middlesex Public School system and graduated in 1980. During her time in high school, Sandra was a part of various clubs and managed several sports teams while holding down a full-time job at Oliver’s Restaurant where she performed many job titles. After completing school, Sandra joined the United States Armed Forces where she completed three years of active duty from 1980 to 1983. Shortly after she enlisted into the Army National Guard where she was a part of the 144 Supply Company which took part in Operation Desert Shield/Desert Storm from 1990 to 1991. Within her military career, Sandra won numerous letters of recommendations and certificates of achievements. While in the Reserves, she was also employed at the American Red Cross from March 3, 1997 until January 17, 2018. She was honorably discharged from the military in 2001. Sandra was preceded in death by her two brothers, Earl L. Macon and Belton J. Robinson To cherish her memories, Sandra leaves behind sisters, Deborah Pratt, Joan Macon, Clementine Macon-Boyd, Linda Macon, Stella Osbourne (Walter) and Nancy Champion; brothers, Arthur W. Macon, Jr. (Otelia), Sandy Macon (her twin); five aunts, Rachel King, Margaret King, Ruth Brown, Dorothy Wilson and Marion Williams, along with a host of nieces, nephews, cousins and friends. A Celebration of Life will be held 2PM Saturday, April 30, 2022 at Immanuel Baptist Church.

Sandra L. Macon, was unapologetically her, true to herself and one of the most loving and hard-working persons you would ever meet. Sandra&#8217;s sudden departure from this life on April 17, 2022 stole the hearts of many. She leaves behind... View Obituary & Service Information

The family of Sandra Lee Macon created this Life Tributes page to make it easy to share your memories.

Sandra L. Macon, was unapologetically her, true to herself and...