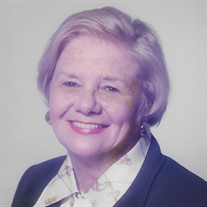 OLSSON, Anne Shirley Carter, M.D., died on Wednesday, February 19, 2020, in her home at Romancoke Farm in West Point, Virginia. Born in Richmond, Virginia on January 5, 1928, she was the daughter of Charles Keen Carter, Jr. and Katherine Nicholas Davis Carter. Dr. Olsson graduated from the University of North Carolina Women’s College at Greensboro with a B.A. degree and received her doctorate from the School of Medicine of the Medical College of Virginia, now Virginia Commonwealth University. She interned at Los Angeles County General Hospital in California and was a medical resident at Johnston Willis Hospital in Richmond, Virginia for two years where she met Sture Gordon Olsson, then President of Chesapeake Corporation in West Point. They married on June 8, 1957, a happy union that lasted fifty years until his death on September 10, 2007. Dr. Olsson was preceded in death by her parents, her husband, and her sisters, Catherine Carter Shannon of Washington, D.C. and Jean Carter Raulston of Decherd, Tennessee. She is survived by three daughters, Lisa Olsson Everett and her husband Clint of Nags Head, North Carolina; Anne Olsson Loebs of Charlottesville, Virginia; and Inga Olsson Rogers and her husband William of Vero Beach, Florida; and one son, Charles Elis Olsson and his wife Dudley of West Point; four grandchildren, Elizabeth Lanier Olsson and Maja Percy Olsson of Richmond; John Gregory Loebs of Brookline, Massachusetts; and Sarah Kristina Loebs of Boise, Idaho. Dr. Olsson was a member of the William Byrd Chapter of the Daughters of the American Revolution and the Colonial Dames of the Commonwealth of Virginia. She served on the board of trustees of the Virginia Museum of History and Culture and the Massey Cancer Center and was a member of St. John’s Episcopal Church in West Point where she enjoyed singing in the choir. She worked in public health clinics in the counties of King William, King & Queen, Gloucester, Mathews, and Middlesex for many years and worked with the local physicians in West Point. Dr. Olsson enjoyed history, particularly of the Civil War, painting watercolors, and loved outdoor activities, especially living at Romancoke Farm. She enjoyed hunting and fishing with her father, husband, and son. Dr. Olsson wishes to thank Thelma Downey, her personal assistant, for many years of dedicated service and guidance; her special friend, Alease Friday, for her good work and cheerful daily companionship; and her devoted personal aides for their loving care. There will be a celebration of Dr. Olsson’s life at St. John’s Episcopal Church, West Point, Virginia at 11 a.m. on Monday, February 24. In lieu of flowers, the family suggests contributions to the Massey Cancer Center, the Virginia Museum of History and Culture, the William Byrd Chapter of the Daughters of the American Revolution, the Colonial Dames of the Commonwealth of Virginia, or St. John’s Episcopal Church of West Point.

The family of Shirley Carter Olsson created this Life Tributes page to make it easy to share your memories.