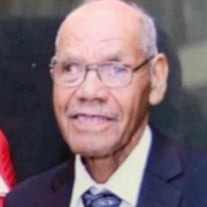 Stanley Samuel “Sam” Cotman, 91, Charles City, Virginia claimed his eternal reward on Friday, March 4, 2022. He leaves many to cherish his memory, his wife of 67 years, Hilda J. Cotman, along with their five children, Stanley Cotman, Sr., Angela Cotman, Cathy Cotman Brown (David), Crystal C. Wells (Brian) and Jewel C. Wells (Edward); seven grandchildren, Tabatha, Stanley Jr., Brian, Benjamin (Allison), Jacqueline, Jasmine and Rafael; three great-grandchildren, Devron, Lavon and Samir; as well as a host of nieces, nephews and relatives share in his loss. Devoted family - Estelle Crenshaw, Portia Jones, Robin Bradby, Larry Tyler, Gladys Hawkins, Edith “Bert” Craddock, Dawn Cotman, Patricia Johnson, Kenneth and Patricia Tabb. Emmett Wimbush and Joyce Hanvey introduced as his children but no blood ties, only of the heart. A mechanic in the Korean War led him to overseas travels to Germany and Hawaii. He returned home to marry the love of his life. He was a good provider, a wonderful father, friend, grandfather, uncle to those who knew him or even just meeting him. He and his brother built his home that now cherishes our fond memories. God always provides what we need when we need it. Sam always shared his love of gardening and the yield that it produced. He could grow anything, from string beans, tomatoes, cantaloupe and watermelon. He had fruit trees and walnuts. Hilda makes the best black walnut pound cake. He retired from Westvaco now known as Westrock in 1996. He stayed in touch with his former co-workers and continued to check on them. His philanthropic spirit consumed him, he would help anyone, he shared what he had, and God multiplied what he had. He was blessed to be a blessing. He visited the sick, he sent birthday surprises in your birthday card, and he genuinely cared. Although, he stopped attending Little Elam Baptist Church to be a caregiver to his wife; he faithfully listened to BBN to make sure he got the Word (Sharper than any two-edged sword). His daily devotions with his brother’s well used and comforting Bible guided his footsteps to walk with Jesus. Have a little talk, with Jesus makes it right. We can’t tell the future, but Sam knew who holds our future and our hand -- God, Our Father. His cousins and nieces loved to cook for him, and he loved to eat. He never gained a pound but that could be because he was Poppa Stopper. You could not stop him. He was always on the go. When his brother’s health declined, he was found cooking and taking care of him. He found creative ways to make things work; it must have been the mechanic in him. Projects he completed from his Grease Rack to the Jiffy Sam to work on cars. He loved his “John Deere”, you would see him cutting the grass, then polishing that “baby”. Nothing runs like a Deere, and Nothing Compares to the Love of Christ. Sam has received his heavenly reward, will you? Do you know Jesus Christ? He is the author and finisher of our faith. Trust Him, Know Him and Believe Him. His word is True. Oh, Taste and See that The Lord is Good. Thank you to the staff at the Bon Secours Hospice House. Funeral services to be held 11 AM, Wednesday, March 9, 2022, at Vincent Funeral Home, 9923 Pocahontas Trail, Providence Forge, VA. Burial to follow services at the Little Elam Baptist Church Cemetery, Charles City, VA. To God Be the Glory Great Things He Has Done.

The family of Stanley "Sam" Cotman created this Life Tributes page to make it easy to share your memories.