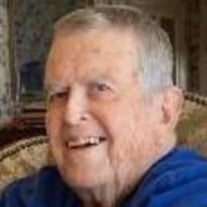 William Guy Townsend,86, passed away March 23, 2022. He was a lifelong resident of King William County. The son of Guy O. and Sally Townsend, he graduated from Augusta Military Academy and then North Carolina State University with a degree in Animal Industry. He spent eight years as an Army Intelligence Reserve officer discharged as Captain. While dairy farming he opened a real estate/auction business and joined Ownby Auction and Realty as a sales manager. Active in civic community organizations, he was a founding member of the King William Rescue Squad, served on the King William Zoning Board and Planning Commission as well as President of the King William Ruritan Club, Forestry Club, Red Cross, as well as The Hundred Bushel Corn Club. For 15 years he was a member of the Bank of Essex Board of Directors. At the state level, he was President of the Friends of Agriculture, and the Virginia Auctioneers Association and a member of the Virginia Agribusiness Council. In later years, he wanted to return to the soil and ran Prestley Farm Nursery for 15 years known for irises and daylilies. He and Emilie loved to travel, always looking for another adventure and making new friends. As long as he was able, fishing and hunting were top priorities. His book, One Man's Footsteps, a collection of essays about his life, was a visit with "the story teller." He is survived by his wife of 60 years, Emilie Laney Townsend, and a son, Guy Langdon Townsend, two sisters, Betty Rose Townsend Sexton (Tim) and Sally Townsend Hart, and a niece and nephews. A daughter, Jayne Yates Townsend predeceased him. Known for his friendly generous spirit and humor, he will be missed. Graveside services will be held at McKendree Methodist Church April 2 at 2 pm followed by a reception. Memorials may be made to Aylett Country Day School. PO Box 70 Millers Tavern, VA 23115 or McKendree Methodist Church, PO Box 254, Manquin, VA 23106.

William Guy Townsend,86, passed away March 23, 2022. He was a lifelong resident of King William County. The son of Guy O. and Sally Townsend, he graduated from Augusta Military Academy and then North Carolina State University with a degree in... View Obituary & Service Information

The family of William Guy Townsend created this Life Tributes page to make it easy to share your memories.